Thank you for sharing!

Clover is an amazing plant.

Beloved by pollinators, helpful to the soil, beneficial cover crop, and medicinally important among other things.

In addition, clover is symbolic and historically significant to the people of Ireland for many reasons.

In a hurry? Pin it for later!!

Clover: Why We’re Featuring This Plant

First of all, we’re featuring this plant for it’s significance to the “holiday” known as St. Patrick’s Day.

As you may know, green beer and such are Americanized additions to centuries-old Irish traditions. However, Clover does celebrate its roots in the Northern Hemisphere.

In addition, clover, or shamrocks, are historically significant to Ireland. But, how exactly did this plant become a national symbol for a whole country?

It’s often said that Ireland is home to more four-leaf clovers than any other place, giving meaning to the phrase “the luck of the Irish.”

Finally, we’re featuring the clover because of its health benefits and importance to the farming industry. Plus, the pollinators love clover! 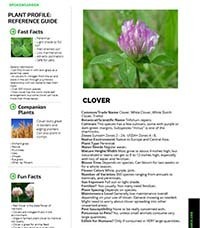 Success! Now check your email to get your free download and confirm your subscription. **And, thank you for trusting us with your email for future garden-related communication. We take our partnerships very seriously.

Clover, or Trefoil, is in the Fabaceae family. Also known as the legume family, they are an economically important family of flowering plants which include trees, shrubs, and perennial (or annual) herbaceous plants.

With over 300 known species, most clover has the iconic triple leaf arrangement, but some clover can have more than three leaves.

Other members of this important family include peas, chickpeas, soybeans, lentils, alfalfa, and acacia to name a few.

Three-leaf clovers often called shamrocks are symbolic to the Irish for several reasons some of which include Druid mysticism, Saint Patrick, and an Irish Revolution in the 19th Century.

To be clear, we should mention that there are two specific species of clover general accepted as true shamrocks: Trifolium dubium (lesser clover) or Trifolium repens (white clover).

Unfortunately, what most people think of as “tradition” on St. Patrick’s Day has nothing to do with the roots of the day.

Saint Patrick is believed to have died on March 17th, in the year 461, so that is a connection.

However, Saint Patrick was not even Irish; he was English. Furthermore, there is nothing uniquely Irish about shamrocks as they are found throughout Europe.

Holiday irony at its best.

First, we travel back to medieval history to the time of the Celtic priests, also called Druids. In brief, they believed that carrying a shamrock would help them see evil spirits coming so they could escape to safety.

According to legend, the shamrock was a sacred plant to the Druids of Ireland because its leaves formed a triad, and three was a mystical number in the Celtic religion.

Next, our brief history continues with Saint Patrick, a Christian priest and patron saint of Ireland. Ever heard of him?

To Saint Patrick, the clover was regarded with high esteem simply due to its appearance. Its three-leaf structure, also called trifoliate, helped symbolize the Holy Trinity in Christianity.

As Irish legend states, Saint Patrick used a shamrock to explain the concept of the Holy Trinity to the Pagan Irish in order to convert them to Christianity in the 5th Century A.D.  Later, Saint Patrick died on March 17, 461.

Finally, centuries after the legend of Saint Patrick, the Shamrock took on meaning as an emblem in the political struggle of the Irish people.

It wasn’t until the 19th century that the shamrock gained popular acceptance as people began to wear it as a symbol of unity and a national emblem for Ireland.

As you can see, shamrocks are kind of a big deal for numerous reasons.

Red clover has been used as a cover crop for years. It is winter hardy, low-cost, and readily available in much of the U.S.

Farmers use this legume to feed their livestock because it is high in protein, phosphorus, and calcium.

In addition, this type of clover acts as an amazing nitrogen fixer which could improve the quality of soil overall.

This type of clover, in addition to white clover, can also be used as a living mulch.

Furthermore, Red clover has important uses in the medical industry, like cancer prevention.

Crimson Clover, not to be confused with Red Clover, is also used a cover crop in gardens and farms.

Similar to Red Clover in its benefits, Crimson Clover can be planted and used during the fall and winter months to let gardens rest and revitalize their soil.

By planting Crimson Clover in the late summer to early fall, winter weeds can be suppressed and soil fertility can be improved due to this plant’s nitrogen-fixing abilities.

When used and planted correctly, garden soil for spring crops can be ready to use right away.

If you do plan on planting Red or Crimson Clover as a cover crop in your vegetable garden, you will need to sow seeds 6-8 weeks prior to the first frost date.

Ready to plant your own clover seeds to benefit your soil and the pollinators?

Do you want White Clover, Red Clover, or Crimson Clover?

Why not buy all three?!

Next time you think about the three-leaf clover, remember the historical significance this small, trifoliate plant has brought to the nation of Ireland.

Whether used to ward off evil spirits, to convert people to Christianity, or as a symbol of national unity, this plant has a rich, diverse history that extends beyond just its shape or color.

In addition to its historical significance, clover is vastly important to both the farming and medical industries.

Next year on St. Patrick’s Day, wear your shamrock with pride and in solidarity if you will.

Give a toast to the great people of Ireland with your pint of green beer and remember the struggles of those that came before you.

Well, that’s all for now. Thanks for reading and we hope we inspired you or educated you in some way. For information about mulching for this spring season, listen to our podcasts or check out either of our previous posts about how to mulch anytime of year or  7 best reasons mulching your garden is beneficial.

Also, If you’re interested in learning about more plants, check out some of our other monthly plant profiles below:

Let us know if you have any questions or comments anytime, we would love to help.

See you in the garden!

Spokengarden.com is a participant in the Amazon Services LLC Associates Program, an affiliate advertising program designed to provide a means for sites to earn advertising fees by advertising and linking to Amazon.com

Thank you for sharing!

You may be interested in these posts from the same category.

HELLO AND WELCOME! We are Sean and Allison, the husband and wife team behind Spoken Garden. With combined backgrounds in horticulture, gardening, landscape maintenance, and education, we hope to educate and inspire you. Read more about us here.

By the way, this page may contain affiliate links. That means that if you click on any of the links we are promoting, we might get a small commission at no cost to you which helps us run our website and podcast. For more information, click here.